We had the absolute pleasure to interview Melissa Wotherspoon about her new indie deck - The Lonely Dreamer Tarot, based on the artwork of Odilon Redon.

This Kickstarter has now finished. To pre-order, click here: - The Lonely Dreamer Tarot

I feel so fortunate to live in a century farmhouse with happy ghosts, my husband, my two (teenage!!) children, and my pack of five wild dachshunds (they’re not really wild, but it builds their confidence and helps them stand a little taller if I say that). We overlook the rolling countryside outside of a quaint little town called Millbrook, Ontario, Canada. Many people have seen Millbrook before and they don’t even know it, because its main street is used in a lot of charming Hallmark Christmas movies :-)

What was your first experience with tarot and when did you fall in love with it?

I can’t remember exactly my first experience with tarot, but I remember walking with my best friend over to the local new age shop, where we bought each other our first RWS decks together. Then we’d sit on the phone for hours with each other, just shuffling forever, until - A JUMPER! - followed by the ensuing in-depth analysis. My best friend and I would keep dream journals and I will never forget one of the most vivid dreams I’ve ever had. At the very beginning of my foray into Tarot, I met the HIEROPHANT himself. He was very kind and mumbled in warm, deep tones, and I remember waking up feeling like I had just been set on a path, as though the Tarot had found me.

What made you want to create this deck? What was your inspiration?

I am a high school arts teacher. Needless to say this time at home has brought challenges as we try to take something so inherently hands-on into cyberspace. There has been a lot of grief to work through in the past few months, so many things that won’t come to be. As a musical theatre director with the perfect cast of students, that has been devastating and a lot to process. I often find solace in visual art, and in this case, Redon’s work came to the fore. I began to experience a dialogue with his work in a way that I hadn’t before, and virtually an entire Tarot deck unfolded before my eyes. I might have been going crazy at the time, because I thought I heard him whisper something to me….must have been the cold winter winds…Anyway, this deck has been my Hermit’s cave - a place to crawl into when I just can’t take anymore white noise. It has helped me process a lot. I didn’t plan on creating another Tarot deck so soon. My first deck, The Low Rider Dachshund Tarot, was born of a need to process the passing of my soul dog, Stella. My son became interested in Tarot, so then we created The Aurum Lenormand deck together, which I dedicated to my friend and her son, who both battle Marfan syndrome on a daily basis. My son is a gifted artist, and as such, tends to be on the quieter side, so this was a way to connect with him. I guess there is a pattern here of the process of creating the deck itself representing a key part of the journey.

I have a different relationship with my decks having worked so closely with them, but I still do pull from them. As an artist and tarot collector though, it’s nice to look at the work of others. Hard to pick just one, but I do love the Pagan Otherworlds. Everything about that deck gives me a buzz. The card stock is actually otherworldly. Another one I gravitate frequently towards is the Wildwood. There are ancient whispers with that deck, and I’m still early on the Fool’s Journey with it and figuring out what it is trying to tell me.

My favourite card would by The Moon card from my Low Rider Dachshund Tarot. This dog shows the side profile of my dog Stella. It’s a card that brings me closer to her as I still feel her presence quite often. Second to that would probably be the Strength card from The Lonely Dreamer Tarot. Who doesn’t need to be channelling Joan of Arc right now?

Creating this deck was a unique experience because I never expected to create a deck inspired by the artwork of someone else. It took me a while to let go of feeling like I was doing something wrong. But then I thought that many people don’t know about Odilon Redon, and his artwork as a symbolist would be the perfect vehicle to get his work out to an appreciative audience.

I want people to know that this deck is free from constraints. As I was creating it, there was an openness I felt, which seemed welcoming and comforting. Anyone can use this deck and hopefully they won’t feel like they need to be bound by the traditional meanings. There is lots of room for intuition here.

How did you first discover the works of Odilon Redon?

When I was in university, I first completed a Bachelor of Science degree and then stayed to complete a Bachelor of Arts in Music and Fine Art. After the constraints of a pretty intense Science degree with a lot of labs and a lot of late nights, the arts degree was like the unfolding of a lotus. It was during this time that everything kind of opened up for me and I first encountered the work of the symbolists, and Redon in particular. I had forgotten about him for many years actually, and then came across his cyclops painting on the internet one day. The deck idea came to me in a flash at that moment.

I will celebrate when every backer has their deck in their hands. A funny thing I’ve noticed about people who create - nothing is every finished, and closure is hard to achieve. I will be relieved though when everything turns out and people are enjoying this deck. As an empath I’m sensitive to their vibes and if they are happy, that will be cause for celebration, and I *might* have a gin and tonic and play some 80’s music at a moderate volume :-)

This is a really amped-up deck with lots of upgrades under the hood. It is an 84-card deck (it has two versions of the Eight of Wands card, as well as an art card, and others called The Seeker, The Guardian Spirit, The Dreamer, and L’Ombre). The card stock is 330 gsm German black core paper, with satin finish and linen texture. The box is a fully designed sturdy book-style box with magnetic closure (the kind we all love as collectors) and luxurious flower petal texture, which includes a lift-out ribbon. Each deck comes with a physical 78-page little white book, included inside the box. The deck is going to look and feel very special. We are working towards a final stretch goal, which will include postcards and a magnet (possibly a bookmark as well).

Thank you for this opportunity!

This Kickstarter has now finished. To pre-order, click here: - The Lonely Dreamer Tarot 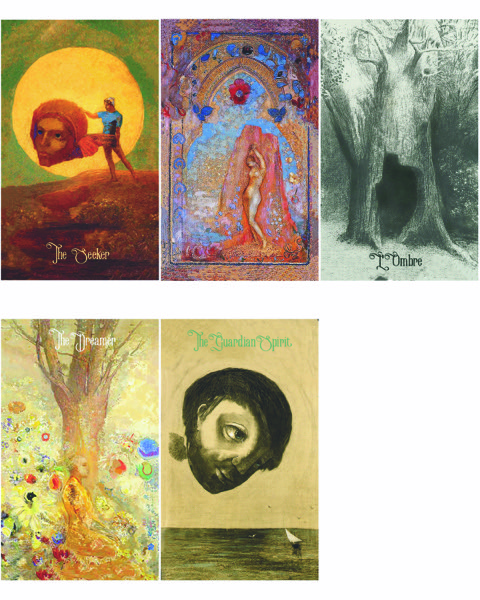